Zac Brown Band are heading to the well known Volvo Car Stadium on Saturday 23rd April 2022, on the Charleston, SC stop of the 2022 US tour. Fans all over the US are dying to see the country kings live again, after a brief break from what they do best due to the pandemic, they're back performing live for their adoring fans this year. "THE COMEBACK" released last year reached number 3 and has had 2 hit singles released already. Zac calls this album their 'best work yet' and we along with so many fans think he's on to something! Get your tickets right away to avoid disappointment! Just follow the link above now!

You don't get bigger or better than Zac Brown Band when it comes to country music. These guys are HUGE! After selling 30 million singles, and 9 million albums, with 15 Number One radio singles, platinum records and winning multiple grammy awards, these guys are relentless in their quest to the top. A live show they say? Yes please! Zac and the band are on the road again with their seventh studio album "THE COMEBACK", which was release in 2021 and went into the country billboard at number 3! With 2 singles released, fans are familiar and already loving the new stuff! Zac admitted he thinks this is the bands best work yet, and is excited to have audiences see them perform this live in action!

Its hard to choose a favourite track from Zac Brown Band's long list of number one hits, with FIFTEEN number ones in the bag, there are plenty to choose from! There have already been 2 new releases from "The Comeback" album, namely "Out in the Middle" and "Same boat"…..it'll be an unmissable experience for any fan of the genre or band when witnessing this outstanding act perform their all new album live infront of a packed stadium, what better way to spend an evening than with likeminded music lovers and fans of this iconic band.

Head on down to the exceptional Volvo Car Stadium on Saturday 23rd April 2022 for the Charleston, SC leg of the US tour…to get tickets to this outrageous evening of country and good vibes, school up and select. the 'get tickets' button, tickets are expected to sell out fast and supplies wont last forever! Buy now while you have the chance! 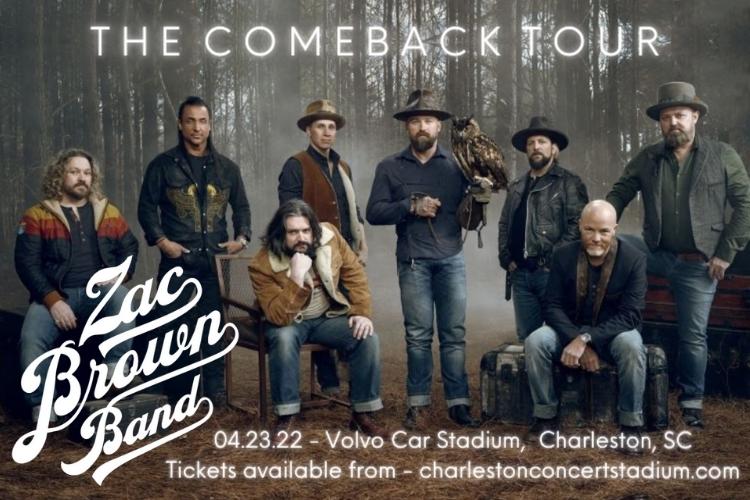